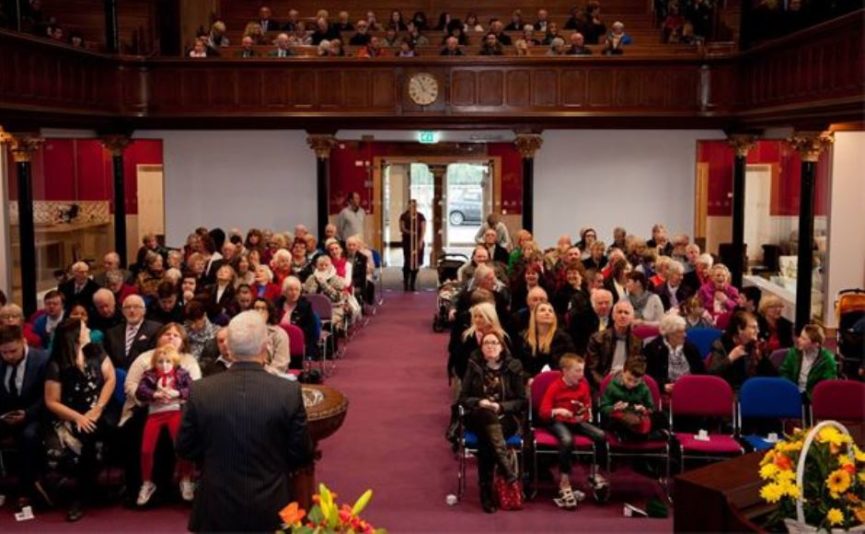 A former Moderator of the General Assembly has officially re-dedicated a church in Perth which has undergone a £875,000 transformation.

Very Rev Dr Angus Morrison said what had been achieved at St Matthew’s Parish Church over the last 12 months was “remarkable”.

He added that he admired the “vision, courage, prayer, and sheer hard work” of the congregation to bring the project to a happy, debt-free completion.

Dr Morrison said it was a “great privilege” to rededicate the iconic building in the absence of the current Moderator Right Rev Dr Russell Barr who had a prior engagement in London.

More than 280 people attended a special service to celebrate the end of the refurbishment programme – one that local minister Rev Scott Burton, a former plasterer, and members of the congregation took part in.

Mr Burton said he was confident that the church, which was refurbished inside and out, had a bright future and hoped it would become a first class community hub in Perth.

The upgrade project involved taking out the pews and replacing them with chairs, installing external disabled access, a café and lounge, an audio system and a flexible stage area.

Glass doors allow the church’s stained glass to be viewed from the street, while the First World War colours of The Black Watch Regiment, which hang in the main church, are now illuminated.

Stained glass has been conserved, new foundations laid, cracks filled and the roof and spire repaired.

Dr Morrison attended the re-dedication service with his wife Marion on November 27 and sat next to the Deputy First Minister of Scotland John Swinney MSP.

The former Moderator said: “It was a great privilege to preach at the rededication service at St Matthew’s following the extensive refurbishment of the church sanctuary.

“What has been achieved is remarkable. It is a wonderful example of a church being made fit for purpose in forwarding the mission of the church in the 21st century.

“I admire the vision, courage, prayer, and sheer hard work, on the part of many people, in bringing the project to a happy, debt-free completion.

“I know that Scott with his Kirk Session and congregation are eager for the building to be fully used as a place of welcome, worship and outreach in this central part of Perth.

“The good-will and prayers of many go with them as they enter on this exciting new chapter of their life as a congregation.”

Speaking to the Dundee Courier, Mr Burton said: “The aim is to see the church utilised by any number of bodies and groups in the city as it is now a first class facility.

“A team of just four people has worked to secure money from funds all across the UK, have organised fundraising events and encouraged the congregation to give generously.

“It has been successful in that we have realised the majority of the vision we set out at the very beginning.

“There have been several fraught meetings to see where we could cut back, reducing the budget from £965,000 to £875,000, but we will complete this with no debt and no surplus.

“They have sustained this building for the future through a combination of hard work, planning, fundraising, physical labour and prayer and I will eternally grateful to everyone involved.

“I could not be more proud of what has been achieved.”